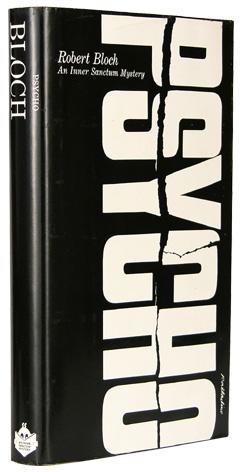 Psycho is a 1959 suspense novel by Robert Bloch. It was adapted into Alfred Hitchcock's 1960 film of the same name.

Norman Bates is a middle-aged bachelor who is dominated his mother, a mean-tempered, puritanical old woman who forbids him to have a life away from her. They run a small motel together in the town of Fairvale but business has floundered since the state relocated the highway. In the middle of a heated argument between them, a customer arrives, a young woman named Mary Crane.

Mary is on the run after impulsively stealing $40,000 from a client of the real estate company where she works. She stole the money so her boyfriend, Sam Loomis, could pay off his debts and they could get married. Mary arrives at the Bates Motel after accidentally turning off the main highway. Exhausted, she accepts Bates' invitation to have dinner with him at his house—an invitation that sends Mrs. Bates into a rage; she screams, "I'll kill the bitch!", which Mary overhears.

During dinner, Mary gently prods Bates about his lack of a social life and suggests that he put his mother in a mental institution, but he vehemently denies that there is anything wrong with her; "We all go a little crazy sometimes", he states. Mary says goodnight and returns to her room, resolving to return the money so she will not end up like Bates. Moments later in the shower, however, a figure resembling an old woman surprises her with a butcher knife, and beheads her.

Bates, who had passed out drunk after dinner, returns to the motel and finds Mary's corpse. He is instantly convinced his mother is the murderer. He briefly considers letting her go to prison, but changes his mind after having a nightmare in which she sinks in quicksand, only to turn into him as she goes under. His mother comes to comfort him, and he decides to dispose of Mary's body and go on with life as usual.

Meanwhile, Mary's sister, Lila, comes to Fairvale to tell Sam of her sister's disappearance. They are soon joined by Milton Arbogast, a private investigator hired by Mary's boss to retrieve the money. Sam and Lila agree to let Arbogast lead the search for Mary. Arbogast eventually meets up with Bates, who says that Mary had left after one night; when he asks to talk with his mother, Bates refuses. This arouses Arbogast's suspicion, and he calls Lila and tells her that he is going to try to talk to Mrs. Bates. When he enters the house, the same mysterious figure who killed Mary ambushes him and kills him with a razor.

Sam and Lila go to Fairvale to look for Arbogast, and meet with the town sheriff, who tells them that Mrs. Bates has been dead for years, having committed suicide by poisoning her lover and herself. The young Norman had a nervous breakdown after finding them and was sent for a time to a mental institution. Sam and Lila go to the motel to investigate. Sam distracts Bates while Lila goes to get the sheriff—but she actually proceeds up to the house to investigate on her own. During a conversation with Sam, Bates says that his mother had only pretended to be dead, and had communicated with him while he was in the institution. Bates then tells Sam that Lila tricked him and went up to the house and that his mother was waiting for her. Bates then knocks Sam unconscious with a bottle. At the house, Lila is horrified to discover Mrs. Bates' mummified corpse in the fruit cellar. As she screams, a figure rushes into the room with a knife—Norman Bates, dressed in his mother's clothes. Sam enters the room and subdues him before he can harm Lila.

At the police station, Sam talks to a psychiatrist who had examined Bates, and learns that, years before, Bates had murdered his mother and her lover. Bates and his mother had lived together in a state of total codependence ever since his father's death. When his mother took a lover, Bates went over the edge with jealousy and poisoned them both, forging a suicide note in his mother's handwriting. To suppress the guilt of matricide, he developed a split personality in which his mother became an alternate self, which abused and dominated him as Mrs. Bates had done in life. He stole her corpse and preserved it and, whenever the illusion was threatened, would dress in her clothes and speak to himself in her voice. The "Mother" personality killed Mary because "she" was jealous of Norman feeling affection for another woman.

Bates is found insane, and put in a mental institution for life. Days later, the "Mother" personality completely takes over Bates' mind; he virtually becomes his mother.

In November 1957 — two years before Psycho was first published — Ed Gein was arrested in his hometown of Plainfield, Wisconsin for the murders of two women. When police searched his home, they found furniture, silverware, and even clothing made of human skin and body parts. Psychiatrists examining him theorized that he was trying to make a "woman suit" to wear so he could pretend to be his dead mother, whom neighbors described as a puritan who dominated her son.

At the time of Gein's arrest, Bloch was living 35 miles (56 km) away from Plainfield in Weyauwega. Though Bloch did not look into the details of the Gein case at that time, it gave him an idea, and he began writing with "the notion that the man next door may be a monster unsuspected even in the gossip-ridden microcosm of small-town life." Bloch was surprised years later when he "discovered how closely the imaginary character I'd created resembled the real Ed Gein both in overt act and apparent motivation."

Bloch wrote two sequels, Psycho II (1982) and Psycho House (1990); neither was related to the film sequels. In the novel Psycho II, Bates escapes the asylum disguised as a nun and makes his way to Hollywood]. Universal Pictures allegedly did not want to film it because of its social commentary on splatter films. In the novel Psycho House, murders begin again when the Bates Motel is reopened as a tourist attraction.

Bloch's novel was adapted in 1960 into the feature film by director Alfred Hitchcock. It was written by Joseph Stefano and starred Anthony Perkins as Bates and Janet Leigh in an Academy Award-nominated performance as Marion Crane (changed from "Mary" for the film, as there was a Mary Crane in Phoenix at that time). Hitchcock helped devise a promotional and marketing scheme for his film that insisted that critics would not get advance screenings, and that no one would be admitted into the theater after the film began. The promotional scheme also exhorted audiences not to reveal the twist ending. Twenty-three years after the release of Hitchcock's film and three years after the director's death came the first of three sequels, all featuring Perkins.

After Psycho III there was also a television pilot named Bates Motel, in which Bates briefly appears played by Kurt Paul. It is not in continuity with the final sequel Psycho IV: The Beginning. Gus Van Sant directed a 1998 remake of the original film in which virtually every camera angle and line of dialogue was duplicated from the original. It starred Vince Vaughn as Bates and Anne Heche as Marion Crane. It was reviled by critics and performed poorly at the box office.

The Hitchcock version of the film is rated number 1 on the American Film Institute's list of one hundred most thrilling films.

Retrieved from "https://psycho.fandom.com/wiki/Psycho_(novel)?oldid=5225"
Community content is available under CC-BY-SA unless otherwise noted.